You are here: Neuigkeiten » News » Research » Participation in Carolo Cup

The Student-team “GalaXIs”, sponsored by the Chair of Computer Science 11, participates annually in the Carolo-Cup competition organized by TU Braunschweig for autonomic moving model cars.

The aim of this competition is to allow students an intensive analysis of interdisciplinary problem statements dealing with electrical engineering, mechanical engineering and computer science at an early stage. Experiences in the practical implementation of student knowledge combined with team work, project and time management optimize their requirements for starting a professional career.

Every concept will be compared and assessed with concepts of the other participating teams. Hereto, the teams have to contest a variety of static and dynamic disciplines.

On February 8th, 2011, the team of Aachen, GalaXIs, achieved the 2nd place in this year's Carolo-Cup in Braunschweig. Therefore, the students were able to take home a trophy for the fourth time in a row, since the beginning of the competition. The team was only defeated by the Team “Spatzenhirn” from Ulm. The Team “S.A.D.I” from Zwickau achieved the third place. Even though the first place from last year could not be defended, the team, consisting of five-members, of which four are new members, was very satisifed with their delivered performance. Our students (from left to right): Benedikt Rieke, Thomas Gatterdam, Bernhard Kirchen, Benjamin Hilgers and Matthias May 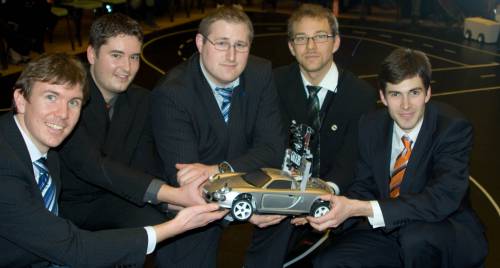 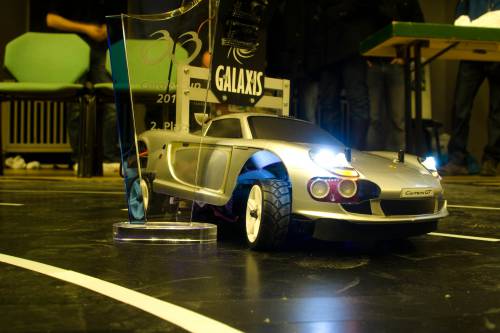 If you have further questions please contact Christian Dernehl, M.Sc..